One of the main reasons to visit the Forever Wild Grand Bay Savanna is for the birding. The birding at Grand Bay is good year-round, but peaks during the fall. Each fall, migrating birds congregate in the lower sections of the property. Several varieties of marsh birds, raptors and resident water birds combine with rare sights such as Vermilion flycatchers to make this a birding hot spot.

The Grand Bay complex is such a bird migration magnet that it has become a perennial stop during the John L. Borom Alabama Coastal BirdFest held each fall. The annual festival offers birders from around the world an opportunity to visit some of the best birding sites in the country.

John L. Borom, biologist, educator and BirdFest founder, says that this area is so bio- logically diverse that The Nature Conservancy calls it one of the “last great places on Earth.”

“Of the 445 bird species listed for the state of Alabama, 420 have been observed in Baldwin and Mobile counties, and 268 have been observed around the For- ever Wild Grand Bay area,” Borom said. “When BirdFest groups visit the area they see Alabama as it must have been hundreds of years ago.” 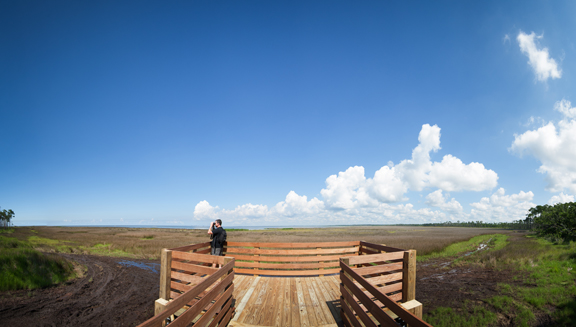 Just north of Old Marine Lab Road, where the Forever Wild tract borders the University of South Alabama property at Point Aux Pins, a recently completed boardwalk allows birders access to the fringes of the upland marshes – a prime birding site. The boardwalk crosses a variety of habitat and includes a viewing platform that gives birders a closer look and their feathered friends. At 6 feet wide and 1,100 feet long, the boardwalk is a welcome addition to the 2014 BirdFest itinerary.

Until recently, there have been only 23 confirmed yellow rail sightings in Alabama. Since the current study began, 16 birds have been found in Alabama and 54 in Mississippi. Future yellow rail research will focus on the bird’s habitat preferences. Initial observations suggest that the yellow rail prefers a grassy landscape that springs up after a controlled burn.

Birds aren’t the only animals that thrive in the coastal marshes and grass lands on the property. The marshes provide essential food and cover for more than 90 per- cent of marine fishes in Alabama coastal waters. The wetland eco- system acts as a nursery for species like the spotted seatrout, red drum, flounder, blue crab and shrimp. Deer and other smaller mammals can also be observed among Grand Bay’s grasslands and forests.

The bogs of the Grand Bay complex are also rich in biodiversity. From carnivorous plants to orchids, the flora of Grand Bay is as diverse as it is beautiful. The rose pagonia orchid, spreading pagonia orchid, snowy orchid (photo on the left) and yellow-fringed orchid all bloom during different times of the year, giving visitors a rea- son to return. The color pallet is especially vibrant in the fall when various coastal asters are in bloom.

Historically, these lands were dependent on wildfires to support various plant and animal species. When the Forever Wild program acquired the tracts that make up the Grand Bay complex, they were fi e- suppressed and in many areas choked by dense woody shrubs and catbriers. The Alabama State Lands Division is re- establishing a fi e-dependent ecosystem through a program of seasonal controlled burns. Slowly, land that was once over- grown is being transformed into a more open, grass-dominated savanna. These controlled burns allow more species to exist within a landscape by providing the proper food and habitat for them to thrive.

Take a weekend to explore the Grand Bay Savanna Complex and the nearby Grand Bay National Wildlife Sanctuary. Just 40 miles to the northeast, Meaher State Park is a perfect camping spot from which to launch your adventure. While in the area, check out Bayou La Batre for some of the freshest Gulf seafood and beautiful scenery.