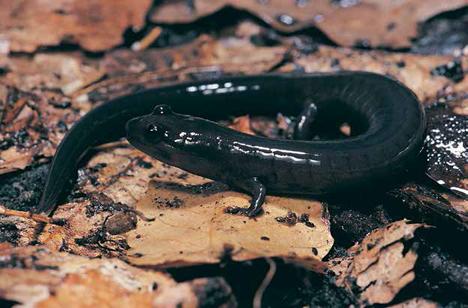 Photo above by Dan Brothers. View additional photos of the red hills salamander by Pierson Hill.

The Red Hills tract is home to one of Alabama’s most ancient residents, the Red Hills salamander (RHS). With an elongated body that grows up to 10 inches, the RHS is one of the largest lungless salamanders in the world.

Its translucent purple skin helps make the RHS a strikingly beautiful animal, but you’re unlikely to catch a glimpse of this creature. It spends most of its time hunkered down in a subterranean den only venturing out at night to ambush small prey like crickets, spiders and earthworms.

The known range of the RHS consists of a relatively small strip of land in the Red Hills region of Alabama. This geographic isolation allowed the animal to evolve independently from other salamander species millions of years ago making it the only member of its genus. Due in part to its very limited range, low reproductive rates and specific habitat requirements, the RHS is federally listed as a threatened species.

Discovered by accident in 1960 by malacologist Leslie Hubricht, the RHS was immediately considered new to sci- ence. A specimen was sent to herpetologist Richard Highton for identification and named in Hubricht’s honor, Phaeognathus hubrichti.

Since 2000, the RHS has been recognized as Alabama’s official state amphibian thanks to a group of Fairhope Elementary School third graders who campaigned for the designation.

The RHS inhabits the forested slopes and valleys below the steep bluff of the Red Hills, which stretch out over Conecuh, Covington, Crenshaw, Butler, Monroe and Wilcox counties. The more temperate slopes and plentiful leaf litter provide the shade, cover and moisture needed for the salamander to survive. Habitat fragmentation is considered one of the primary challenges to the survival of the RHS.

While only covering a relatively small portion of the RHS’s range, the Forever Wild Red Hills tracts help to ensure that this unique Alabama resident remains viable. The total number of Red Hill salamanders is unknown, but researchers continue to perform periodic surveys in hopes of better understanding its conservation requirements.