Taking a county road in Alabama will often lead to a surprise. One of those surprises can be found just off County Road 151 in Pinson, Ala., the 462-acre Turkey Creek Nature Preserve (TCNP). This Forever Wild tract not only serves as a protected area for endangered species, it is also a recreational park for the public and hosts many educational programs throughout the year.

Established through a partnership between Alabama's Forever Wild Land Trust and the Freshwater Land Trust, TCNP and is co-managed by the Southern Environmental Center (part of Birmingham-Southern College), The City of Pinson and local citizens groups supporting the conservation of the Turkey Creek Watershed. The preserve opened to the public in 2009.

The key to the TCNP’s natural beauty is its location. Because it is situated at the beginning of the Cumberland Plateau, the preserve offers excellent seasonal wildflower viewing and birding, including many species of neo-tropical birds. Other attractions include the 68 degree coldwater springs of Turkey Creek, the 25-foot Turkey Creek Falls, catch and release fly-fishing and some of the best nature photography opportunities in the state. 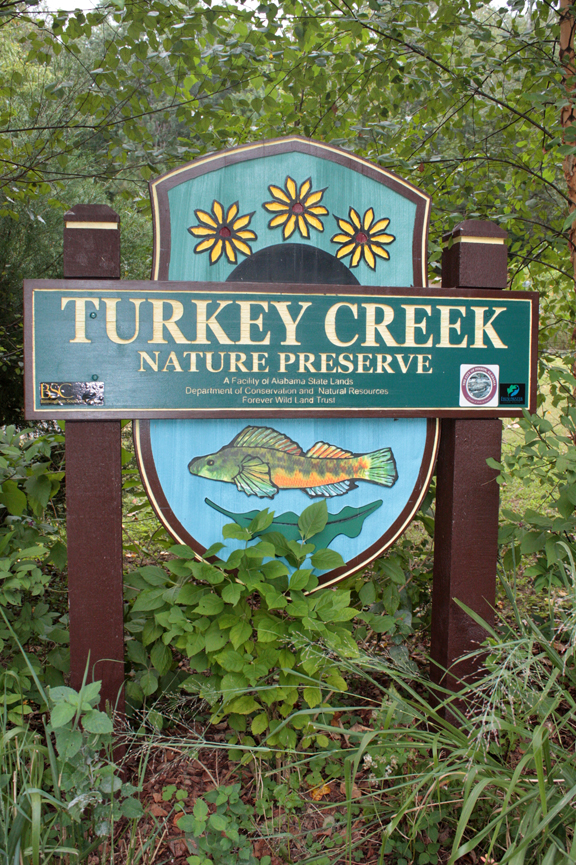 The TCNP primarily combines two aspects the Forever Wild Land Trust. In addition to providing public recreational opportunities, the preserve contains some of the most biologically diverse habitats in Alabama. The waters of Turkey Creek are home to three endangered species of darter: the Vermilion Darter the Watercress Darter and the Rush Darter. The Rush and Vermilion Darters occur only in Turkey Creek and nowhere else in the world, which gives the preserve a vital role in maintaining Alabama’s natural diversity.

Historically the preserve was inhabited by Native Americans and later became a key industrial site for John and David Hanby's Grist Mill and Iron Forge until 1865. By the middle of the 20th century the land that today comprises the preserve had been split-up among various private landowners. Some sections were well known locally for swimming and Baptisms, while others had become illegal trash dumping sites and party spots for locals.

Fortunately the land has been reunified into a single tract and today is a model for how a public-private partnership can help to reinvigorate a community.

One way the TCNP is making an impact is through its educational programs. Since opening three years ago hundreds of students in 4th grade through college have taken part in many hands-on environmental and history programs. The preserve is also the site of many college and university research projects focused on the dense natural diversity and fascinating local history of the area.

The preserve is open year round, but public access days are Wednesday through Sunday. Mondays and Tuesdays the preserve is closed for administrative work. Operational hours are seasonal. During the summer gates are open 8 a.m. – 6 p.m., and in the winter 8 a.m. – 5 p.m. Admission is free.